This past weekend,Â Gator GamesÂ of San Mateo, California, hosted a local tournament as part of Fantasy Flight Games‘ Android: Netrunner Plugged-in Tour. Gator Games is my local go-to brick-and-mortar hobby boardgaming shop. While they’ve hosted other official Netrunner game nights, this most recent one was the one to attend. A couple of FFG staffers were on-site to moderate the tournament and take on all manner of runners daring enough to face corporation challenge decks that included yet-unreleased cards. In addition, all tournament participants were given the chance to vote on one of two potential runner identities. The winner of the vote will be introduced to the game in a later expansion.

I signed up to play in the 32-person, five-round, Swiss-format tournament. This was the first competitive Netrunner event in which I had ever participated, and despite my prejudiced apprehensions about these kinds of events, I actually had an enormous amount of fun.

Netrunner – the original Richard Garfield Netrunner – is what I used to declare to be my favorite game of all time. My Schlaghund moniker actually comes from one of the cards in that original version, reminiscent of a formative time in my gaming adolescence, when just about every week one summer, I hung out with a high school buddy at a local comic shop, sipping bubble milk tea and running on data forts late into the night. Netrunner was already dead then – long discontinued by Wizards of the Coast to focus on their Magic: The Gathering cash cow. But I knew -Â we knew – that Netrunner was way ahead of its time, and so we kept the dream of its resurrection alive in our own little way.

Nearly a decade later, Fantasy Flight Games announced their reboot of the game in their uniqueÂ Android universe. I’ve never been happier about a game announcement in my entire life. But by that time, I was married, I had a full-time job, I had a kid. Getting heavily involved in the community wasn’t really an option, but in any case, I pledged my financial support for the franchise. I have a standing reservation at Gator Games for all future Netrunner expansions.

It wasn’t until this past weekend that I finally made the time to attend an actual event. I signed up with my cousin – a heavily-invested Magic: The Gathering player and Netrunner newbie. We spent a couple of late nights getting up-to-speed on the current metagame – one of those nights happened to be the night before the tournament.Â He constructed a couple of decks that won previous tournaments in the Plugged-in Tour; I built a couple of my own from scratch. We played late into the night. I completely rebuilt my runner deck at the last minute, getting only a couple of practice games with it. The little time I had to sleep was spent having Scorched Earth nightmares.

After downing an unhealthy amount of coffee, we showed up to Gator Games a little early. There’s always one thing I worry about at these competitive events – the dicks (for lack of a better word). You know, the sore-winning, sore-losing, rules-lawyering, no-take-backsies assholes that epitomize all that is unpleasant with tabletop gaming. There may have been some there. But I’ll never know, because every single person with whichÂ IÂ played was a friendly, approachable sportsman. There were a couple of other first-timers, but even the regulars were happy to welcome me into the tourney-going fold, recounting their own misfortunes on the circuit and encouraging me while actively disassembling me. I got a lot of remarks from the other competitors about how they had played versions of my decks and loved them. I even got a couple of compliments about some unique card combos I employed. And surprisingly,Â no one pulled the let-me-teach-you-my-pro-knowledge attitude with me. The game still felt fresh – like everyone was still figuring it out.

This was no surprise, though. The game of Netrunner is a unique one – one that emphasizes smart play and clever reads as much as (if not more than) the deck-building itself. If you’re not familiar with the game, here’s the rundown: one player plays the big bad Corporation, seeking to advance its nefarious agendas; the other player plays the free-wheeling computer hacker – the Runner – looking to infiltrate the Corporation’s servers, exposing and thwarting the Corporation’s plans. It’s a glorified game of hide-and-seek – no, scratch that; it’s a heist game. All of the Corporation’s cards are pieces of data that can be accessed by the Runner; they are played face-down, and it is the Runner’s job to find the cards that matter – the “agendas” – and steal them before the Corp can “advance” and score them.

It’s a slightly more complicated beast than, say, Magic (though I’d argue that Magic’s timing issues and corner cases are much nastier and more subject to rules ambiguity), but to me, its main draw is the greater degree of finesse required to play the game. Your deck never plays itself, and it alone will not win tournaments due to the incredible mutability of the game state. Many players compare it to Poker, though the strategies go much deeper than simple probabilities. There are subtle elements of misdirection, information management, and timing – some of which I gleaned from my earlier Netrunning days, and a lot of which helped me take some wins against relatively newer players in the tournament.

In fact, I ended up with six match wins in the tournament (one of them being an admittedly lame “timed win”) – three as Runner and three as Corporation. I snagged a total of eleven “prestige points” throughout the tournament – just one shy of the top-eight cutoff of twelve points. I’d wager I ended up at around 11th or 12th place. Not bad for my first showing. I expected much worse, and even if I had gotten last place, I would’ve enjoyed myself. Not only did I learn a good deal about the current metagame, but I got to enjoy the company of like-minded players that are equally as passionate about a superb game. And hey, I got my first full-bleed promo card. (And after seeing the other full-bleed promos people were sporting, I wished I’d been going to events earlier.) My cousin also placed in the middle of the pack, even though he came packing tournament-winning decks, which goes to show again just how much success depends on experience and strategy.

My first taste of tournament play has gotten me hungry. I’ve already got a new Runner deck assembled and ready to test, and I’ve got a number of ideas on how to improve my Corporation deck. I’m looking forward to the future expansions and how they change the competitive landscape. Most importantly, though,Â I’m happy I’ve finally been able to participate in strengthening the community of gamers that are making the game I’ve loved for over a decade a resounding, modern-day success. 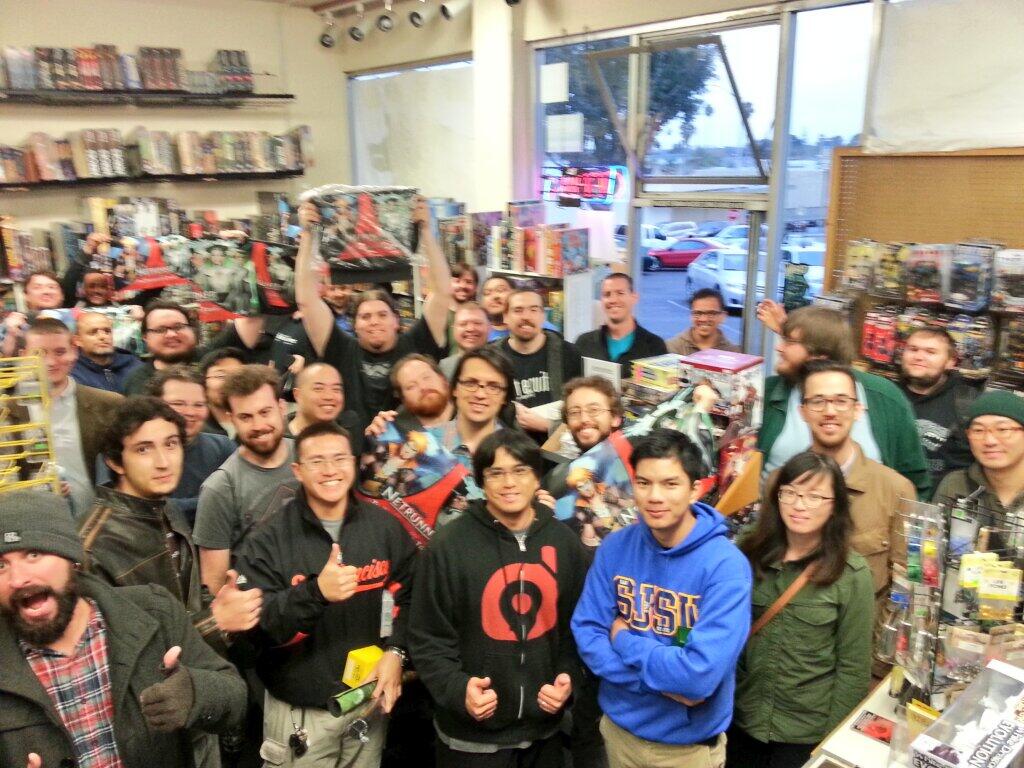 P.S. Apparently, videogame journalist Dan “Shoe” Hsu, currently working at the gaming arm ofÂ VentureBeat (but most known to me as part of the legendary 1UP Show crew), alsoÂ attended the Gator Games event in some capacity, but I didn’t realize it until he showed up in my 3DS’s Mii Plaza. Judging from his recent articles on GamesBeat, he’s really into tabletop gaming. Respect++.